How To Build A Toaster In Under Six Months

This is the incredible tale of how one man built a toaster, from all-natural materials, in just six months

If humanity stopped, and you were one of the last people on earth, could you rebuild society? Despite all of the technology that we’ve developed throughout history, no individuals possess enough knowledge to rebuild things like radios, and computers, and even toasters from nature, if society suddenly disappeared. 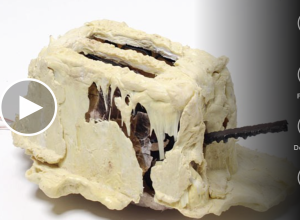 That was the point that Thomas Thwaites made in his project, “build[ing] a toaster – from scratch”. Over the course of several months, Thwaites set out on a mission to rebuild a simple toaster that he had bought at his local Walmart for a few pounds.

Thanks to help from professors, geologists, and friends, he mined iron, and copper, and turned it into steel and wiring. He used wood to make old-fashioned molds of a toaster’s plastic pieces, and then melted down plastic (the one thing he couldn’t create on his own, so he “mined” it from a local recycling plant) to mold out a rudimentary shell. After months of work, he turned it on, and it worked, for a minute or two, until the circuitry melted (he also couldn’t figure out how to naturally make insulation for the wires).

Someone built a toaster from scratch! #crafty

Thwaites’s efforts are a testament to his perseverance, and an interesting commentary as to how unprepared we would be for a (extremely unlikely) terrible event. Watch his TED talk, to learn more about his journey, and see his toaster in action.

Join Our Inner Circle For More Interesting Videos, and Articles