As much as this sounds like the crowdfunded Pebble smart watch, which raised $10 million on Kickstarter last years, smashing records, this is indeed a Microsoft product, known as the SPOT watch (short for Smart Personal Objects Technology). 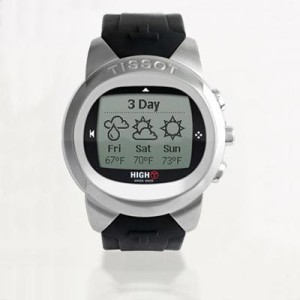 One of the Several SPOT models

As regular readers know, I rarely concede victories to Microsoft, the brainchilds of  the surface, Vista, and Bing, but I have to concede that they were several years ahead of the smartwatch trend.

The Pebble Has Barely Evolved From the SPOT

The SPOT was indeed a connected watch. Via FM signals, the watch picked up news, sports, and weather, and graphically, just as the Pebble does.

Designwise, the SPOT is surprisingly similar to the Pebble, the Kickstarter smartwatch that raised over $10 million. Control is through three buttons on the side, and the touch black and white display, just as on the Pebble.

So why is the Pebble so much more successful

It’s actually interesting to consider that Microsoft was just ahead of its time, as Apple was with the television mac. Here are the 5 reasons SPOT never caught on.

Microsoft Should Hire Back Whoever Came up with the SPOT

In the end, the SPOT was a moneyloser, and last year they shut down the SPOT radio network, four years after discontinuing the line, but it showed major potential, leaving me to wonder what happened to the team behind SPOT.

In all likelihood, its brainchild has long since been fired, or left the company over the failure of SPOT, but I hold out hope, that somewhere in the bowels of Microsoft, he/she remains, working on a new watch to convince us why Microsoft should be a market leader.

A guy can dream. Read about my own experience with my smartwatch, and with Google Glass, or leave a comment as to what you think.