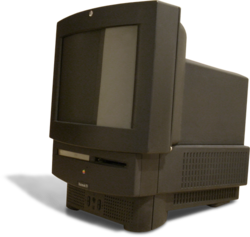 This title may be a little misleading but it’s true. Did you know that in 1993 Apple released a Combo Mac/Television. It was only on sale for five months.

So why did it fail? You couldn’t watch TV while using the computer so if you want to compute you will need a separate TV. The screen was small. The machine was slow.

I’m pretty confident that Apple will succeed in their second try at conquering TV. Nope. That would be the Apple Interactive Television Box which failed in the prototype stage and only a few hundred were made when they were produced for testing in the late ’90s. Maybe their third. Still no. The Apple TV featured limited success in the mid 2000s. Fourth? This was where the real learning experience came. The Apple TV V2 was their closest TV success. Now they will definitely succeed when they take the Xbox and others head on for the TV market soon. They did the same thing with the iphone. They tested the Touch screen tablet idea in the ’90s with the Newton and then won the market less than ten years later.

Check back tomorrow for the latest in Apple news, Tips, and Tutorials… And make sure to subscribe!
And Presenting The irack (LOL):