Watch the 1968 Invention of the Computer Mouse… And the internet

I try to highlight innovation, and that usually involves recent things like this bookprinting machine, and Google Glass, and even Bitcoin , but I’d be remiss if I didn’t bring you this, one of the most important tech demos of all time. 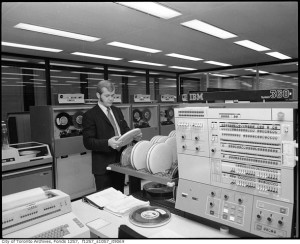 The year was 1968. Martin Luther king was still alive and preaching his message of peace, the Vietnam war was in full swing, the Beatles were the big band, and scientist Doug Engelbart was working on technology decades ahead of his time…technology that would lead to the internet.

In this video, amazingly preserved, Englebert introduces somethings that have become a staple of modern life. For example, the computer mouse, which allowed us to navigate without arrow keys.

Oh yeah, and he also showed off what would become the internet. Up until ’68 computers each lived in their own little (or not so little – they were the size of a room) world. There was no email, or IM, or interconnectivity whatsoever.

This video is the first known demo of something called “networked-computing”, or multiple people on computers around the world interacting. This networked computing eventually led to the internet. So watch in amazement, and enjoy.

Doug Engelbart’s 1968 Demo in full from Frode Hegland on Vimeo.