Note: I apologize (or do I) for this review being so late. I’ve had my Chromecast for months, so consider this the most experienced review on the web.

Google Chromecast is the entertainment device of your dreams… if you’ve been dreaming of a simple, web enabled TV at an affordable price. The Chromecast has been in my TV since early August, so it’s long overdue for a review here. Here’s my full review of the Google Chromecast. If you want to skip setup, scroll down to “Use (finally)”. 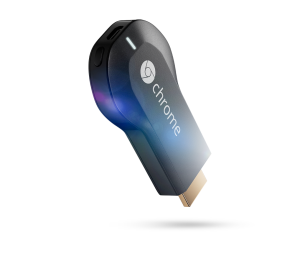 Waiting for my Chromecast was like waiting for a baby on the way (ok – maybe not). For weeks after my order, I would anxiously check my order page, waiting for my due date… the date when my new baby would come, and uproot my entertainment life.

From My Doorstep to My TV

Finally it arrived one evening. I sprinted to the door to pick up my Chromecast, tore open the the cardboard shipping container, and found a small, elegant blue and white box inside. On the box, in big lettering, was simply “Chromecast”. I pulled the box out of its sleeve, and it opened like a book. Inside, I found my Chromecast, and neatly underneath the packaging was a power plug, and HDMI extension. I looked for setup instructions, but all I could find were 3 simple steps affixed to the cover of the box. I was a bit concerned, but those three steps ended up being all I needed.

Setup was deadly simple. Hooking my Chromecast up to my 4-year-old TV required simply plugging it into an open HDMI port, and connecting the USB cable to the TV’s USB port, and the Chromecast’s small slot (this provides the power). Quickly, instructions for syncing with my computer appeared onscreen.

Installation on most Macs, PCs, and smartphones (android or iOS) is as simple as connecting to Wifi, installing the Chromecast app, or the Google Chrome Chromecast extension, and following a few on-screen instructions.

When I first got my Chromecast there were only four apps enabled: Netflix, Youtube, Google Play, and Chrome-mirroring (web browsing). By press time though, quite a few other providers like Pandora, Hulu Plus, and Bitcasa offer app integration with Chromecast.

Chromecast is built-in to the apps and the websites of most of these services, like Netflix and Youtube, so sending a video from your phone, tablet, or computer over to Chromecast to watch is as easy as tapping the Chromecast button.

*I also did a comparison of the Apple TV, Chromecast, and Roku Entertainment devices for your reference*

Low-power, and out of the way

When it’s not in use, the Chromecast takes up very little power. It also takes up a tiny amount of space in comparison to devices like the Google TV and the Apple TV, and when not displaying videos, it displays a nice slideshow of rotating beautiful nature photos. I’m a sucker for beautiful photos, so I leave my TV on too often when I’m not watching, just to watch this slideshow.

Chromecast works by downloading content to the Chromecast over Wifi directly, rather than through the controlling device (your phone, tablet, etc), so with a decently fast Wifi network, my Chromecast was very responsive. Within seconds, my Youtube videos, Netflix shows (mostly law and order), and Pandora music was on my TV. After a few seconds of buffering, videos play in beautiful HD, as clear as or clearer than regular TV, and with the added benefit of not having to deal with commercials.

One of my favorite features of the Chromecast, but also one of the least stable, is its ability to mirror tabs, and websites from Google Chrome browser on any mac, PC, Android, or iOS device, directly to my TV.

For static content like photos, articles, and videos without sound, this works fantastically. For video, it’s a bit choppy. Unlike with chromecast apps, mirroring transfers content directly from your device to your TV, significantly slowing things down. Audio is usually out of sync, and content just doesn’t have that crystal clear look.

Sure, it looks fantastic for browsing the web, but for the moment, chrome-to-chromecast mirroring just doesn’t work perfectly – at least not for video and games.

On the bright side, the feature is technically in beta, meaning it’s a work in progress. It will get better, and work better over time, and even in its current form, it’s well worth the $35.

We still don’t know what Google plans for widespread Chromecast app distribution, but what we do know is that soon we’ll be seeing some more great apps on the Chromecast.

Pro Tip: Put It Where You Work Out

I put my Chromecast on the old TV next to my treadmill, and I ran 6 miles that week (a lot for me). Being able to watch Netflix on a decent sized screen while working out is a blast, so if you do pick one up, put it where you get fit. It’s portable enough that you could even move it between your main TV, and the TV near where you work out.

Should I buy the Chromecast?

Yes. I don’t normally offer blanket advice on gadgets, but at $35, the Chromecast is an incredible value for everyone – practically an impulse buy. It’s an amazing gift that fits into secret-santa range in affordability.

The Chromecast is simple, and easy to get the hang of, but it does its job very well. It’s one of the few gadgets that I would feel comfortable gifting to my (non-technical) grandparents, and would still use myself. The interface is smartly designed, and simple but functional, and all of the apps I’ve used have worked without a hitch.

The Chromecast is certainly worth its $35 price, but by next year it will be ten times as valuable.

But Google did an about-face recently. I received an email inviting me to a Chromecast hackathon at Google Headquarters in Mountainview California. Google is finally encouraging the third-party development culture that made their Android OS so popular. This is a really positive step.