Have You Visited Amazon’s 3D-Printed Store?

Amazon now sells 3D printed goods, in an official section. You can customize things like wallets, bobbleheads, and jewelry, and Amazon will 3D print your item, and ship it to you for a pretty reasonable price. It’d definately novel.

The gimmicks, and little plastic gobbledeegook that Amazon is offering is only attractive for the thrill of owning something 3D printed, and not for any actual value beyond that. Still, there is some significance in the store, and I’ll tell you why… 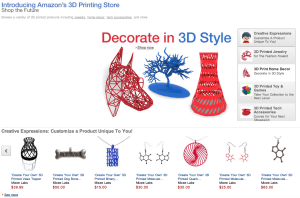 The Significance of the new Amazon 3D print store

Help Bring 3D-printing into the mainstream!

Back in the 1960s, micro-chips, invented by Fairchild Semi-conductor, were too expensive for the mainstream. They were revolutionary in nature, but everyday consumers couldn’t afford them, and it was holding the tech industry back. The CEO of Fairchild decided to cut the price of the micro-chip to one dollar, and instantly, demand skyrocketed, forever changing the tech world. We wouldn’t have the computers of today, if Fairchild hadn’t made that price cut. That’s why I urge 3D printing companies to cut their markup on items. It may hurt profits now, but it will help 3D printing into adoption, and benefit their company in the long-run. On that note, I’m creating a twitter-petition to urge 3D printing companies to cut their markup. You should sign it!

I’m standing up, to say that 3D printing companies should cut their profits now, to increase them later. See why here: