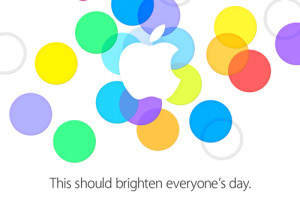 Apple has sent out invitations to this year’s iPhone launch event, September 10th as expected, but in true Apple form, they left us with a riddle to decipher, and a debate over what it means.

All that is clear and proven is that we will se an event September 10th from Apple’s Cupertino headquarters (at 1 PM), and we will see the release of iOS 7 along with the iPhone 5 something, or some form of new iphone. I’m also hoping for the reported fingerprint scanner, but I’m doubtful.

What Does it mean?

The invitation reads “This should brighten everyone’s day”, and displayed is the Apple logo flanked by bright and colorful little translucent circles. The question is, what does it mean?

AllthingD (we interviewed their founder):

“Not much for Apple kremlinologists to work with, though, taken together with the colorful illustration emblazoned on the invite, it could be viewed as a hint about the mid-end iPhones the company has been working on, which will reportedly be offered in a number of different colors.”

“Rumored as a plastic low-cost option available in multiple colors, a number of leaks have suggested it will be branded iPhone 5C with the C presumably standing for color.”

…that are all wrong

All interpretations include mentions of the iPhone 5C. There may in fact be a low-cost iPhone, but it will not be called the iPhone 5C, and I doubt it will look as reported. As explained here, the “leaked” photos were clear fakes.

“Though the invitation itself makes no mention of the iPhone, it does say that the announcement “should brighten everyone’s day” — a likely reference to the fact that Apple is expected to offer its next iPhones in an array of new colors. Specifically, leaked parts have suggested “iPhone 5S” will be available in a new “champagne” shade, while a low-cost plastic “iPhone 5C” will potentially be available in white, green, red, blue, pink, and possibly more.”

Tuaw has a particularly interesting reading of it (also quite entertaining):