Beginner’s Guide To 3D Scanning: What it is, and What it Can Do

This is the first article in our new series, Experts Explain. Read all about the series here, or check out other articles in the series here. In this article, 3D scanning expert Antoine El Daher will teach you what 3D scanning is, how it works, and how you can use it.

So, what is 3D scanning exactly?

3D scanning turns physical objects into their digital 3D representations. Where normal scanners and cameras just capture a two-dimensional, “flattened” view of the world, a 3D scanner captures height, width, and depth information and turns it all into three dimensional models on your computer that you can navigate through, look around, and edit.

3D scanning has been around for decades, but with advancements in 3D scanning and printing technology, and historically low prices, 3D scanning is finally becoming big business. In this article, we’ll talk about optical 3D scanners, the most talked about type of scanner recently, how they work, and how you can use them.

The term “3D scanner” is actually pretty generic, because there are several different techniques that 3D scanners can use to create their scans. The most common ones today are structured light scanners, laser-based scanners, and photogrammetry-based scanners, all categorized under the heading of optical scanners, and today we’ll look at each of the three technologies.

A Laser-based scanner typically consists of one or more laser “emitters” and one or more cameras. The scanner shines the laser onto the object and measures its position using the cameras, and a 3D image is generated from those measurements by a computer.

For example, if the camera and laser were pointed at the object, and the laser was at a right angle to the camera, then moving the object away would cause the laser’s beam to move on the camera in the corresponding direction, changing the measurement.

The camera records the laser’s movements, and the difference in how the light from the laser is recorded is what allows the scanner to judge shape and distance with incredible accuracy, down to only a few microns.

If you’ve enjoyed this article so far, sign up for our newsletter, and we’ll let you know about our best stories, like this one.

Structured light based scanners are similar to their laser-based counterparts in that they emit light patterns.

While the laser scanners emit only a single point or line of light which is tracked by the camera, structured light scanners usually use a two dimensional projector to emit more complex patterns that are detected by the corresponding camera.

This, in theory, allows for more efficient capture since more of the object is illuminated at a given time, allowing more of the surface’s nooks and crannies to be measured at once.

Photogrammetry is a somewhat different technique from laser-based and Structured-light scanners in that it doesn’t often involve an emitter of light. Basically with photogrammetry you (or the device – if it’s automated) take pictures of the target object from various angles and the three-dimensional structure is reconstructed automatically using computer software.

You don’t typically have to shine any lasers or projectors onto it, meaning that you can theoretically scan larger objects, like buildings, and cars.

There are dozens of other techniques for capturing the three-dimensional structure of an object and all of them have their advantages and disadvantages, but those three methods are the three you’ll hear about most commonly.

What Can you use a 3D scanner for?

Now that you know what 3D scanning is, you’re probably wondering what the point of it is. “What can I do with it”. This section will cover a few of the many cool things you can do with a 3D scanner.

With a 3D scanner, you can pick up any object that you own, scan it, and then 3D print it back out, all within hours. It’s like cloning. You can even modify whatever you scan before reprinting it.

Our team scanned a bust of Abraham Lincoln that we had, then added his signature “stovepipe” hat atop his head in the 3D file, and reprinted him back out using our 3D printer (picture below of the first and second bust).

Other people use this technique to scan, fix, and reprint broken car parts (see video below), and home items. 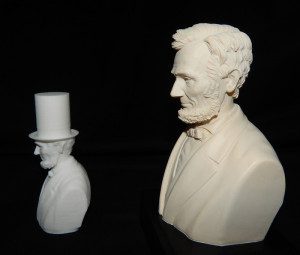 Showcase your collection online, from every angle

3D scanners can also be used to catalogue and display anything, in full 3D. For example, if you owned a shoe store, you could scan all of the shoes in your store, and put them up on your website so that people could see them from all angles.

If you’re a sculptor or artist you can store your creations digitally, and showcase them to remote buyers around the world.

Putting you or anything you own into a video game

Gaming is another great way to use your 3D scanner– many games allow you to import 3D models into the game, allowing you to recreate your house, or yourself (If you have a handheld scanner) in the game. 3D scanning also saves game developers time by allowing them to scan in scenery, rather than building everything from scratch themselves.

Having any physical object digitized into a 3D model allows you to make modifications or repairs to it. Let’s say for example you want some custom chocolates to give as a birthday gift.

All you’d have to do is scan a toy car, build a mold out of it digitally, and you’re ready to make some tasty car-shaped chocolates. You could even add in your own personalization to the file. Or you can scan a broken item of yours, fill in the missing piece digitally and have that piece re-printed so you can fix it.

Dental and other medical professionals have been using 3D scanning for a long time now. CT scans and MRIs are both popular examples of 3D printing in medicine, but many doctors also use optical scanners, for tasks like scanning dental molds.

Wrap-up: Why You Should Care About 3D Scanning

With the recent boom in home 3D printing, new ways to use 3D scanning are being created on a daily basis.  Over the past two years, scanner technologies based on lasers, structured lighting, and photogrammetry have advanced at a rapid pace through both startups (like ours) and larger companies.

Good scanners are finally being made available at an affordable price (ours can be preordered this week only through Kickstarter for $600), and it’s going to be exciting to see where this technology takes us in the future.

You can check out Antoine’s Scanners on his Kickstarter Project. His campaign ends Sunday January 26th, so check it out now! Also sign up for our newsletter, and we’ll send you good articles, written by experts, explaining the latest technical trends.

Antoine El Daher is the founder of Robocular LLC, a new 3D scanning company which has raised $115,000 and counting on Kickstarter.