I love animation. It’s something I’ve been doing since I was little, and when I had the opportunity to interview the CEO of the company that makes my absolute favorite animation software (review here), I couldn’t say yes fast enough.

Today we have an interview with Oliver Breidenbach, the cofounder and CEO of Boinx Software which has created some of the best creative software out there, and some of the highest grossing products on the Mac App Store. Boinx has received awards and praise from around the globe for the design of their applications, including the 2006 Best Mac OS X User Experience runner-up, and the 2009 Apple design award. 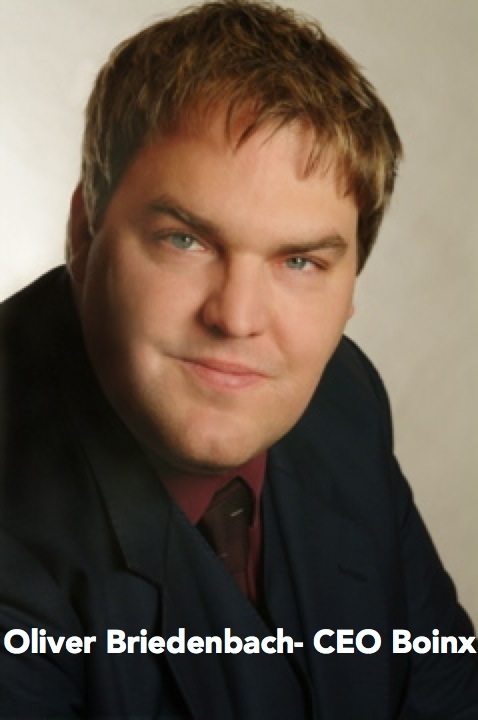 OB: My father taught me to program in Basic on an Apple 1 in 1976. I was 7. He did not have a lot of time, so after a short introduction, I had to teach myself. But learning to program this early carries the advantage of really knowing what’s going on inside a computer. Today’s high level languages seem like magic compared to the early programming experiences.

OB: My father brought one home one day. He had been visiting a tiny, unknown company with 4 employees in silicon valley and met a strange guy named Steve Jobs…

OB: Sure. Recently, with one fetching nearly half a million at an auction, I put it in a bank vault, though.

OB: In the late 1970’s there were lots of players. We had all sorts of computers around the house. There wasn’t that big of a difference between OSs those days. I was 15 when Apple released the first Mac in 1984. It wasn’t really targeted at curious 15 year olds who wanted to take things apart and way to expensive. Back then, the big play was Atari vs. Commodore. It was like your first car wasn’t going to be a Ferrari. In 1987 or 1988, Apple had a student promotion for a Macintosh SE at something like 60% off and I could convince my parents to invest into one. By 1990 we had about 20 Macs at my parents company and I’ve been using Macs ever since.

You could argue though, that OS X is so different from what Mac OS used to be that I have dropped Mac OS in favor of another OS. And iOS again is such a big change we will all soon be dropping OS X in favor of yet another OS. I think this used to be another key difference between Apple and Microsoft: Apple was always thinking about how it could come up with the better that killed its own good and not how to protect the good against the better.

OB: Usability is the most important aspect of the design. Our goal is to make software that is powerful and enables people to make cool things, but also easy to use so that they can focus on the things they create and do not have to invest a lot to learn the tool. People should also enjoy using our software, so it needs to be friendly.

OB: It seems as if most commercially successful software nowadays makes at least an effort at usability. But there are some things that are fundamentally broken, like email. You may paint a nice interface on it, but the flaws are systematic. I think it speaks volumes that you can still introduce a new one to the market creating a big hype. But since you can’t solve emails issues in the client, no product sticks.

Fortunately, the iPhone and iPad have paved the way for radically different approaches to some of those kinds of problems. I think it is great that MS Office is not available for iPad and now people are discovering that it is not a requirement and can be replaced by something better.

OB: The Mac always catered to the more creative people. But Boinx Software’s first commercial projects did indeed focus on office use. In 1996, Apple had teamed up with IBM and WordPerfect (which probably nobody even remembers these days) to create an amazing, document-centric system called OpenDoc. We were working on a chat client for this system that has a striking resemblance to iMessages today and on a barcode printing engine. Both projects were keeping up with OpenDoc nearing completion when Steve Jobs returned to Apple and axed OpenDoc.

Founding Boinx Software came natural to me and my brother. Even as young kids we just knew we would run our own software company one day.

OB: I was an idealist and I thought that computers were there to serve people not the other way round. Only Apple subscribed to this ideal to an extend that would satisfy my idealism.

OB: Just the other day we had a family gathering at my mother’s place and watched old Super-8 films of family outings, christmases and birthdays. Among the many films also were our first stop motion movies from the late 70’s. Back then, we were lucky that my father’s camera allowed for single frame exposure but it still was a pain to create the movies. After shooting, you had to wait a week to get the film back from processing and only then did we find out that the movie was partly out of focus.

With iStopMotion we created a product that was unique at the time, very disruptive – some professional animators wrote to us that they were now animating 50 times faster than before – and one we would want to use ourselves.

OB: Oh gosh! Microsoft will never ask for our advice, but I doubt they would understand it if they did. It is a cultural thing. For example, if there are two ways to do something, the Microsoft way is to give the user a choice and make them set a preference somewhere. The Apple way is (or used to be) to think about what would be the best for users and stick with that. There are many things like that.

Take the difference between the iPad and the Surface. The Surface is a laptop that tries to be a tablet. The iPad is a totally new device that has many shortcomings compared to a Laptop but as a consequence also has a much better user experience. It really is a Post-PC device while the Surface is a We-Can’t-Let-Go-Of-The-PC device.

OB: The days of the PC are over. I suspect PCs will still be around in 10 years, but they will have become an expensive niche product. When the kids who grow up with an iPad today grow up, they won’t want to go back to the PC. But I do not think it will all be mobile in todays sense, either. There clearly will remain a need for large screens and precision input devices, and computing power will always be easier to increase in a machine that can be water cooled, as big as it needs to be and plugged into the electricity grid. But those machines will disappear from our view.

Likewise the days of software for individual users is over because at the price users are prepared to pay for such software, a healthy business can not be sustained. Developers need to find new business models.

OB: In the past we have very much relied on the high skills of some extraordinarily talented individuals and less on a structured process. We would think about a new product, make it the way we imagined people would like to use it and put it out there. After shipping, we put the users in the driver’s seat, by analyzing how they were using the product and trying to improve their experience. Obviously we have been doing a great job, as evidenced by winning the various Apple Design Awards and others.

OB: I use a Retina MacBook Pro and my iPhone 5 most. I also have an iPad 3 and an iPad mini which I use for testing.

OB: I once spoke with Scott Forstall a couple of years ago, before the iOS days. He told me that he and his kids were huge fans of iStopMotion.

I also failed to meet Steve Jobs once in 1997 or 1998. Back then, Apple had an “Executive Forum” at the WWDC where they were explaining to executives of 3rd party developers how they planned to turn Apple around. Then-CFO Fred Anderson gave the best business presentation I have ever attended. I was sitting in the last row of a room with about 100 people which was darkened for the slides. Someone sat down next to me sometime during Anderson’s talk. He may even have said “hi”, but I was so focused on following along that I did not pay much attention. At the end of his presentation, Anderson says: “Well, to take your questions, we have a special guest: Please welcome Steve Jobs.” At which point he gets up out of the seat next to me where he had been sitting for about an hour and walks up to the front of the room.

On October 5th, 2011, by extraordinary chance, I happened to be in Cupertino for a meeting, 5000 miles from my office. When I left to drive back to the airport to board my flight back home to Europe, my Apple friend noted the car of Apple’s chief PR person parked in an emergency spot outside of Apple headquarters. “Where she is, Steve is not far away”, he joked. An hour later, shortly before I returned my rental car at San Francisco airport, I heard the news of his passing on – ironically – the radio.

So, I will always regret not having introduced myself in 1997, but at least I got to share a press release with Steve Jobs: when Apple announced the Mac App Store, I was one of 3 developers quoted.