Maker Network Refuses To Release Property To Ray William Johnson- Who is this Feud Hurting More?

Two years ago Ray William Johnson signed his channel on to the Maker Network in good faith, believing that for the agreed upon terms they would help him grow his channel and raise more from advertising. When Maker tried to sleazily change the terms in the middle of the contract, he wanted out. Or at least that’s the story he’s telling. Make Network on the other hand is telling a tale of a declining audience that just didn’t justify a production crew. When you put the presented evidence together though, the story becomes quite apparent. 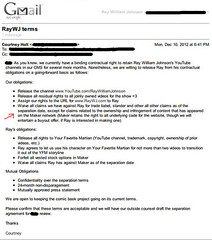 From the evidence presented by Ray William Johnson, including contracts, emails, and other communications, his tale seems more likely. First of all, the CEO of Maker is a convicted felon which he did not reveal to Johnson until after the contract was signed. That alone should be cause for termination. Then, a year into a two year agreement, maker tried to change the terms. They wanted lifetime rights beyond the term of the contract to Johnson’s content, along with a 50/50 split on revenue for life on anything he has ever made.

What does this mean? They would get half of all revenue on Johnson’s popular Youtube channel (over 2 billion views and 6 million subscribers) and his other projects. Most of these come from before his partnership with Maker, so therefore there is no reasonable justification for these terms. Johnson wasn’t comfortable, so he declined. Then they began extorting him, threatening to take over his brands, and when he finally decided to leave, they sent out a press release with all-out lies about a declining audience. His audience has grown greatly and his channel is the most popular on Youtube.

Over a month after he left, he still hasn’t been given his accounts back, and so finally yesterday he released a plea for help with evidence of his tale on the blog, “New Media Rockstars”.

From the evidence he has presented, there is no question in my mind that he would win a court battle, and his property back, so here’s my question. Is this going to hurt Maker more than RWJ?

Maker just became the world’s most popular Youtube Network in October, much of it thanks to Ray, and losing him means losing a significant source of revenue. The reputation hit they’ll take from this whole situation means that most future successful Youtubers will probably go to a rival network, or not go to a network at all. If you remember Lammar Wilson of Wilsontech1, he signed with Revision3, a competitor, only to leave 3 months later. Youtubers enjoy their freedom and that could hurt these content networks. Finally, the legal fees could be up the wazoo should they choose not to cooperate.

It was simply a stupid decision to try and extort the most popular Youtuber there is, and I think they’ll pay for their stupidity.