What My Trip To the Pharmacy Taught Me About Technology

Happy Turkey day everyone. In 1963 the Jetsons first aired and a new generation of dreamers was introduced to a dreamy future of  widespread technology, videochatting, robots, and flying cars. It seemed so crazy then, but minus the flying cars and life in space, our lives are very similar to that of the Jetsons. 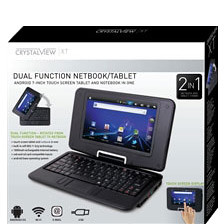 The incredible point that we had reached became especially apparent when I paid a visit to CVS Pharmacy. I was browsing through the selection when I came upon a computer. A $100 tablet PC with built-in cameras and such running a modified Android OS. The Crystalview Xt. We’ve finally reached the point where anyone can afford a computer, and they’ve become such a consumer necessity that they sell it at a pharmacy!

The first personal computer in 1965 cost $23,000 (adjusted for inflation). This computer costs 1/230 of that one which didn’t even include a display or processor.

From the trends of today, it seems that within a few years computers will be as affordable as an alarm clock. Granted that this isn’t a computer for anything more than browsing a web, hitting the one hundred dollar mark is a major milestone and sets an unavoidable trend. And just so you know, the flying car is on the way. It’s awaiting regulatory approval. Once again, Happy thanksgiving.