A Year After Steve 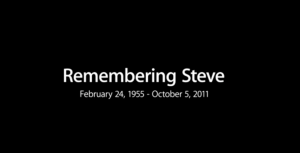 One year ago we lost the greatest Entrepreneur in recent memory, Steve Jobs. You can idolize him, or hate him, but you can’t deny he changed the world. Nothing I say is new, so I’ll keep this short, but on the one year anniversary of his death I have to say something.

Look at what happened to Apple since his death. They released a completely horrible maps application among a few other failures. This isn’t Apple’s first or worst product, but losing the touch of Steve means losing some of the perfectionism we’ve come to expect.

I saw a video yesterday on Forbes which was an interview of one of Steve’s early software engineers. He says that under Steve at least one engineer would have lost his job for the maps gaffe. He didn’t just ask for perfection. He demanded it, and it was effective. But I still believe that the framework he left in place will allow Apple to still thrive for generations. Now, we’ll get to see whether he’s a political genius this cycle. He warned Obama that he could be a one term president, and given how well Steve knew the American people, I’d say that he could be right. We shall see. Back to the topic though, Steve’s legacy will endure. Be sure to check out Apple’s video about him on their homepage today.