Google Glass seems way ahead of its’ time… and then you look at the market and find that several other similar (though not as high-tech) technologies do in fact exist. Case and point: The Oakley Airwave. 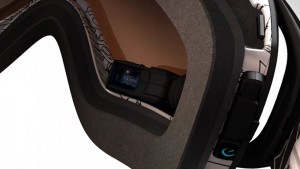 Notice the little bottom screen with a teeny tiny display.

These cool (in multiple senses) high-flying ski Goggles feature a heads-up display using the same display principle as google glass to display things such as your location, airtime, and more. They project a tiny image into a remote corner where it just catches your eye unless you focus on it. They look pretty awesome too. They’re pretty sick, but they’ll run you $600 for a pair, whereas when Google Glass launches officially, it will probably be in the $400-500 range.

HUD (Heads Up Display) glasses aren’t perfect though. As I wrote about recently, research I conducted found that Google Glass could pose a serious health and safety risk, and in a sport like skiing where it’s a constant battle to avoid crashing into something, taking your awareness away from the task at hand is risky.

Still, we’re seeing implementation of this on fighter planes, and more recently cars, and statistics and real-time monitoring will soon be a part of everyday life. Imagine, one day you’ll just have to look at the oven to see if it’s on, or speak a command to see if you have butter. It’s going to be cool. For now, you can pick up the Oakley airwave, or preorder a developer model of Google Glass. Do you plan on buying any form of smart glass in the future?