Chip Hidden in Google Nexus 4… And You Can Access It

When Google quietly announced it’s latest flagship smartphone, the Nexus 4, which is made by LG, people were shocked that it did not have 4G LTE technology, but rather HSPA+. While HSPA+ is not bad (it actually can compete with LTE on speed) it isn’t quite as fast and won’t be supported as much in the future. Google says that they didn’t include LTE in order to keep the cost down and ensure compatibility with all GSM networks. Apparently though, there is an LTE chip hidden inside the nexus 4. 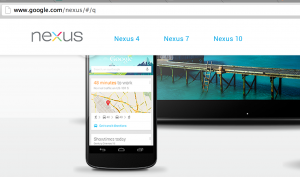 The Nexus 4’s internals are largely based on LG’s flagship smartphone the Optimus G. It is possible that the LTE chip was copied over from the Optimus G in order to be able to manufacture the device in the same factory, which means that apparently there is an LTE option available (a little easter egg). Either way, this is definitely welcome inside the device, because using a simple hack, anyone with the Nexus 4 can have 4G LTE enabled and working. See this guide to learn how… http://www.technobuffalo.com/companies/google/android/hackers-get-nexus-4-running-on-4g-lte-networks/